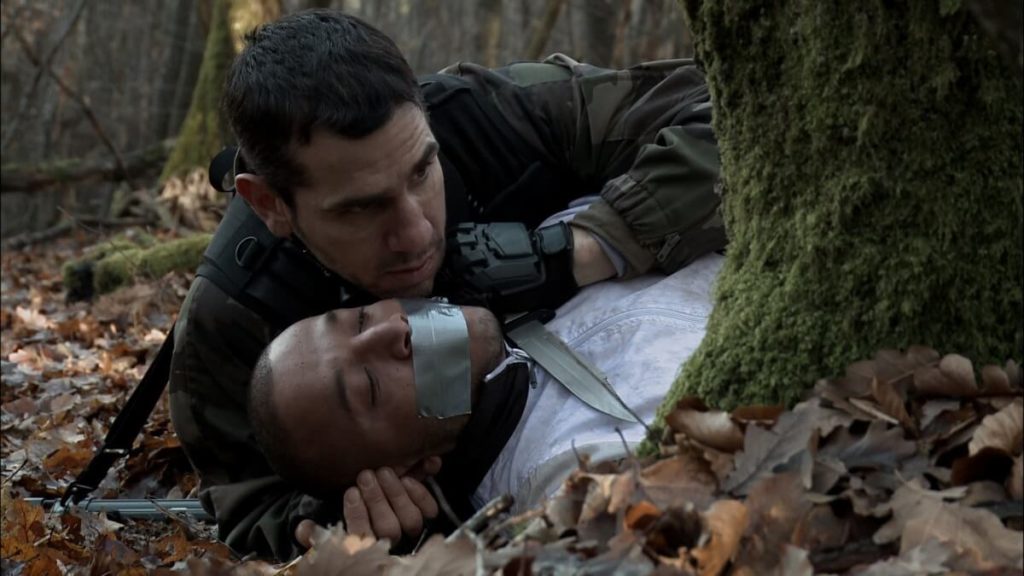 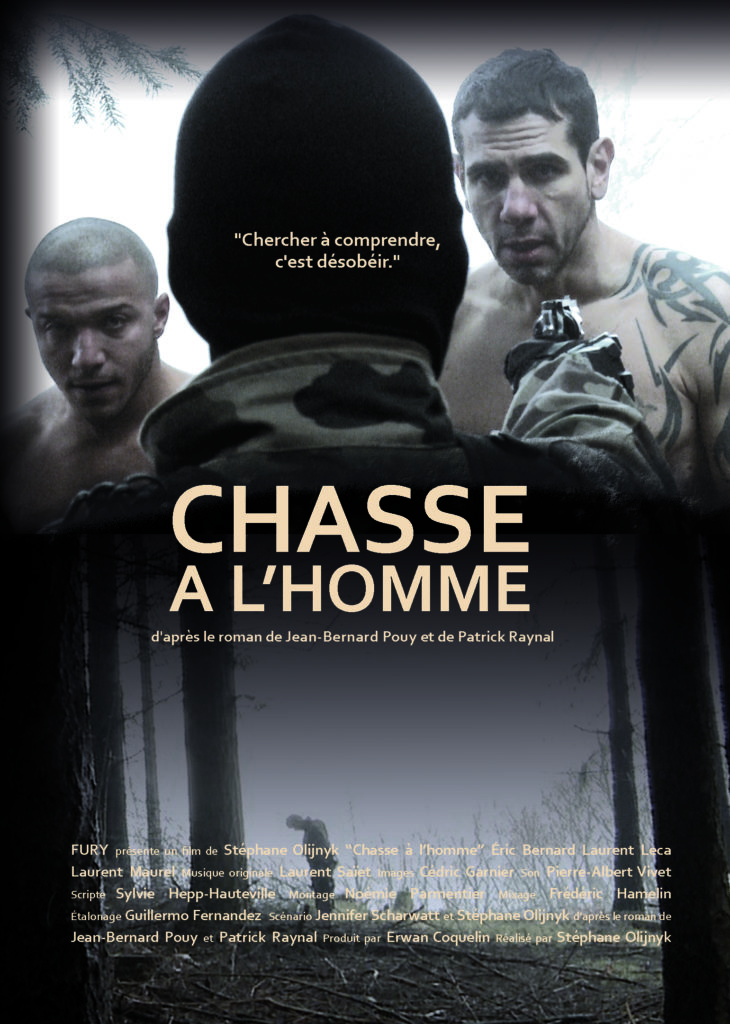 We are aware of the horrors of war, especially now since we are engaged in a war where people lose their lives every day. We also have become very familiar with terrorism and have paid a high price with 3000 dead after the 9/11 terrorist attack. Yet most of us have experienced war close up and what we know about war comes to from the media and I am certainly not recommending that you live in a war zone so you can know what war is about, I did that in Israel and lived through three wars and it is not to watch death and see your friends buried. Stephane Olijnyk brings us his vision of war as seen through the eyes of a terrorist and a hunter and in 28 short minutes he shows us more than we could ever expect to see. Garvas is a hunter for the Special Intervention Unit and he goes out to take care of a young terrorist that his agency has been tracking. He captures him and as they begin a long walk through the woods, each tries to outsmart the other—and that is all I can say except that the almost half hour that you spend watching the film will keep you on the edge of your chair. As they walk they torment each both physically and mentally. You begin to question that if during wartime there are rules for being human and practicing respect. This is one of the most powerful films that I have seen in a very long time and it us brilliant. It is now on the festival circuit and we can only hope that it will find a releasing company. Olijnyk directs and he also adapted the film from a book by Jean-Bernard Pouy and stars Eric Bernard, Laurent Leca and Laurent Maurel. You do not want to miss this short film.

It’s great to hear that the Iris Prize is raring to go for its 2012 festival as it announces that it’s open for submissions. I attended and covered it for So So Gay last year. It was my first time there and I utterly loved it. Despite being totally knackering it was enormous fun and I’ve already put this year’s dates (10th – 14th October 2012) into my diary regardless on whether I’ll be covering the festival again, or just going on my own accord. However, this piece of news reminded me of something that I’ve wanted to pen for a while now, so I thought this might make a nice first post for this blog.

At the festival, one of what I felt were one of the weaker films at 2011’s festival was a French flick called Manhunt (to give it it’s English title) by Stéphane Olijnyk, which I described as ‘…laboured with a sense of trying too hard to be edgy, and indulged in an overt and cliché military fetishism.’ I certainly wasn’t the only person who felt this way about it, from festival goers that I spoke to. But on my round-up article for So So Gay, someone posted a comment to a link to an altogether very different review by Amos Lassen that was surprisingly positive and interesting to read.

As much as I, like any other reviewer, can get a tad defensive when having an opinion challenged (depending on how nice or nasty it’s put), I do really enjoy it when someone disagrees with me. Indeed, what I think have been some of my stronger reviews are ones where myself and Arts Desk editor, Matt Wolf, have exchanged fevered e-mails enforcing our often very polar viewpoints. I feel I end up having my own thoughts challenged and therefore can stand back from a piece better.

Confronted to a very different review of Manhunt to my own, this was no different. Of course, no review is ever wholly objective. That’s impossible. There will always be the reviewer’s own tastes and past interactions with the genre that will heavily weigh their opinion. But what about immediate factors?

When I read Amos’s review I immediately thought of several things:

2) Did the reviewer watch this feature by itself?

3) If not, what was the calibre of the other films it was seen with? i.e. was this the best of the bunch?

Although I still stand by my opinion of the film, I do often think that I might have ended up with a different one if I viewed the film under different circumstances; if I’d seen it on its own, or if the quality of the films it was shown with had been a lot worse. Or, maybe I wouldn’t have.

Then, thinking back, the same thing happened when I wrote about May 2011’s Queer as Film event which I also reviewed for So So Gay. The film that was shown was a piece by Pierre Stefanos entitled Bedfellows which had won more than a handful of awards at previous festivals and screenings. Yet when it was shown at Queer as Film, and this is unfortunately not an exaggeration, the entire audience laughed AT it! ‘…unrealistically optimistic [and] crammed with every imaginable cliché,’ was my verdict.

However, on reflection, the films that preceded it were all British. One of them was the rather marvellous Toothless by Steven Dorrington (see embedded video), which, along with the others, was a fine example of the pessimistic and self-deprecatory dry humour that we’re famed for. Then, along came Bedfellows, which I still personally feel is a typically over-American, Disney-esque, slice of perfect, “happily ever after”, super-sweet…thing. But I do sometimes wonder that whether given the timbre of films leading up to its showing meant that myself and the other audience members rated it a little unfairly.

Both short films are obviously doing quite well for themselves despite my grumbles. Manhunt was part of the prestigious Iris Prize Festival 2011, and Bedfellows has an intimidating amount of laurels flaunted on its promotional material. Though they may not have wowed me, I still wish both films all the best, and hope that others find charm where I hadn’t. And I promise that when I review my next batch of short films, I’ll try my best to not be swayed too much by others shown alongside it.